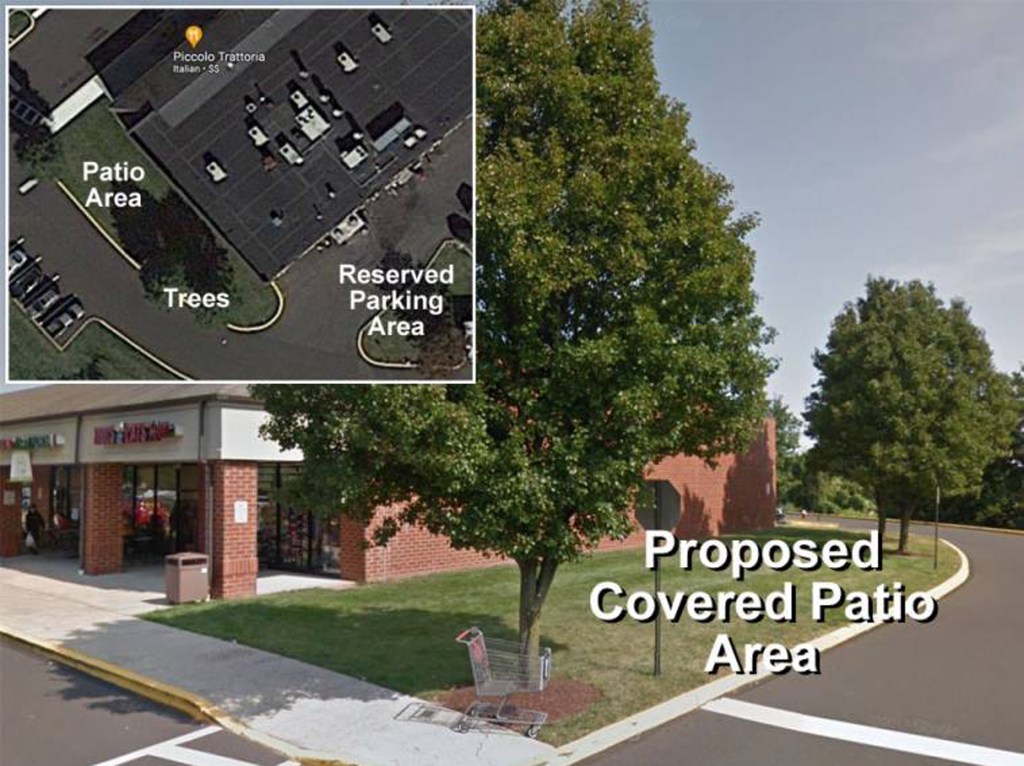 NEWTOWN TOWNSHIP >> The Newtown Township Board of Supervisors will this week review plans submitted by Piccolo Trattoria to expand its restaurant at the Newtown Shopping Center on West Road.

The restaurant proposes to expand into the former Dogs and Cats Rule space and build a 2,212 square foot covered outdoor dining area with 112 seats at the west end of the mall, which is anchored by ACME.

The restaurant applied to the township for a conditional use permit for the expansion. He will also seek a waiver from the township’s zoning hearing board on April 6.

In order to remain viable in the wake of the COVID-19 pandemic, owner Fahmi Elabed said restaurants needed an outdoor seating component/option. To do this, he said Piccolo Trattoria will need variance relief for waterproof cover and parking.

According to Piccolo’s zoning application, a variance is required to allow for an impermeable coverage rate of 59.87%, which represents an increase of 0.22% over what is currently permitted.

A derogation is also necessary to allow Picollo to continue to maintain 953 parking spaces, of which 169 will remain “held in reserve”. The addition of a patio would require the construction of 15 additional parking spaces.

During a review of the project by the Planning Commission, members asked several questions regarding parking and the removal and relocation of two trees.

Elabed said there has always been more than enough parking. Parking, however, could be a sticking point given the increase in potential customers due to the expansion of the restaurant and the addition of terrace seating, according to planners.

While the 2,212-square-foot patio could accommodate an additional 112 patrons, the request did not indicate how many additional seats would be available in the planned 2,000-square-foot expansion.

A member of the commission asked if the trees to be removed at the end of the center could remain in place. The project engineer however advised that this would be problematic as the trees would interfere with the patio cladding.

Following its review, the Planning Commission recommended that the Board of Supervisors support the application.

“The restaurant side of the mall has adequate parking and other businesses at that end are closed in the evening,” the commission noted. “We have asked that an effort be made to move the trees if possible, otherwise they will be replaced,” the commission said in its report to supervisors.

Also at this week’s meeting, supervisors will decide whether to support or oppose the Newtown Athletic Club Zoning Board’s waiver request to hold event-style shows at its facilities.

Earlier this year, the township issued zoning enforcement notices to prevent an event-type display and sale from being held at the NAC’s athletic training facility on Pheasant Run in Newtown Business Park.

The enforcement notice stated that the proposed event-style display and sale was not a permitted use on the property. In response, the NAC requested a waiver to allow event-type shows and sales to continue at the property.

The NAC originally planned to hold a gun show, which a handful of residents opposed at the Jan. 26 board meeting. It is currently advertising a Bucks & Montgomery County Home Show from Friday, April 22 through Sunday, April 24.