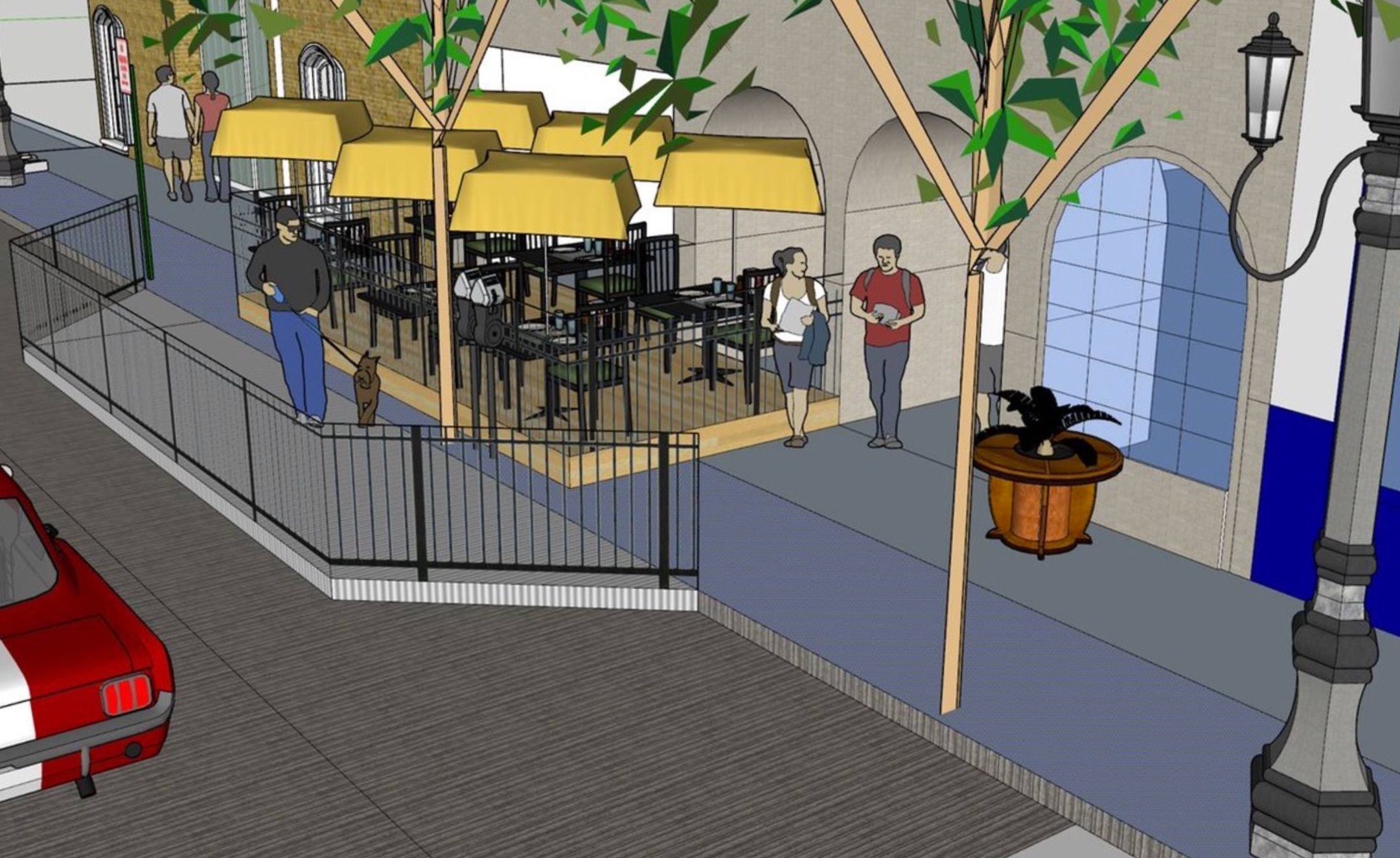 A proposed seasonal ‘Pedlet’ to support outdoor dining at Pickle’s

The State College & Co. Hotel is seeking approval from the State College Borough for a seasonal walkway that would allow outdoor dining at Bill Pickle’s Taproom during warmer months while improving pedestrian access along South Allen Street.

The “pedlet” would be in place from spring through fall in the two parking spaces directly in front of the tavern at 106 S. Allen St., connecting to the sidewalk and circling the Pickle’s seasonal outdoor patio.

In 2017, the the borough council approved a three-year agreement for Pickle’s to have an outdoor dining area spanning the sidewalk from April to the end of October. The bridge allowed a clearance of 5 feet at the narrowest point of the sidewalk.

Jeff Sorg, CEO of Pat Croce and Company, owner of the Hotel State College business, told the State College Transportation Commission on Tuesday that in seeking a new license for outdoor dining, they wanted to explore a different concept that addresses concerns about cramped walkability. path on the sidewalk that resulted from previous iterations of the apron.

” We have examined [a pedlet] for many of our restaurants as it grows in popularity as a way to promote walkways while facilitating increased outdoor dining,” said Sorg. “Hopefully this model is one that will work. We think it’s an attractive look. From what we have seen in other downtown locations, we hope this will encourage pedestrian visits and provide a pleasant experience for downtown customers.

The walkway would be ADA accessible and would have a fence along the side of the street. Hotel State College would essentially lease the two parking spaces to the borough for a fair market value to be determined to replace any lost meter revenue.

The Hotel State College would be responsible for constructing the pedlet “with an emphasis on providing an attractive, as-rendered walkway and terrace that enhances the streetscape along Allen Street”, according to a project description.

As with the terrace in previous years, customers would be required to enter Pickle’s to access the outdoor dining area. There would be no direct access from the pedlet to the bridge.

Borough engineer Andy Arnold said the pedlet would have to go around a tree and a utility pole, and a nearby bench would likely be out of place. A public bike rack near the property would not need to be moved.

“The overall concept is there,” Arnold said.

Agenda papers for the Transportation Committee meeting noted that “additional alfresco dining is consistent with the goals of the Downtown Master Plan.”

“The pedlets have proven to be an effective strategy to support the general planning goals of the town center for greater walkability and more outdoor dining,” the agenda reads.

The Downtown State College Improvement District submitted a letter of support for the plan.

The transportation commission unanimously approved a recommendation to the borough council to approve the license agreement for an outdoor terrace and the pedlet.

“As someone who often lives downtown, I applaud you for trying to find ways to improve the downtown experience,” said commission chair Hugh Mose. “There were issues with the first one, I call it ‘Bill Pickle’s Porch’, and these had to do with the narrow sidewalk that remained. I think your approach this time solved that problem.

Commission member James Graef said he believed the pedlet and outdoor patio would bring value to the downtown core.

“I think it’s important that we recognize that it’s better than two parking spaces because it also activates the street and supports businesses,” Graef said. “It looks like a big project.”

Borough council is expected to vote on the proposal at its Monday evening meeting.